. . and the Connection With The Masonic Fishing Charity 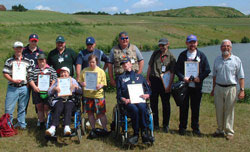 areas. Physical and mental disabilities observe no boundaries – so why should the endeavours of the Charity?

In no time at all there were over 30 masons keen and eager to become founders of this Lodge. The Provincial Grand Secretary for Hertfordshire was quick to offer his support and very kindly gave his time and experience to guide us through the details and procedures which would have to be undertaken along with the Founding Secretary.

Thus the Lodge of Opportunity was formed in 2004 and the idea caught on fast. The 30 founders became 34 and many new members have joined from the non-masonic fishermen and helpers who come along to the events. The Lodge and the idea is surely guaranteed to be successful. 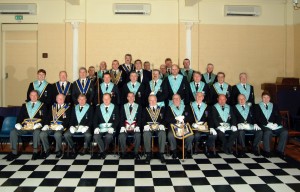 The explanation of the Lodge of Opportunity Badge

The badge has been designed to represent the link between Freemasonry and The Masonic Fishing Charity.

In the centre is the logo of the Charity, showing a leaping fish against a blue sky and a sun indicating that the Charity brings happier times to those less fortunate than ourselves by introducing them to the sport of fishing. The initials of the club ‘MTSFC’ emphasizes the Lodge’s connection with the Charity, where the founders of the Lodge came from and the intention of the lodge to promote the work of the Charity in Masonic circles.
Over the badge is the slogan ‘In the Face of Adversity’, which has been modified from the Charity’s original slogan, ‘Fishing In The Face of Adversity’, to indicate that the Lodge will work in bringing ‘Opportunities’ to all those who may be in need.
This is surrounded by arched trout fishing rods with the lines suspending the Masonic logo representing the roots of the Charity and the lodge which came from a group of Masonic Flyfishermen who formulated the concept of bringing an interactive fishing and countryside experience to those with ‘Special Needs’. 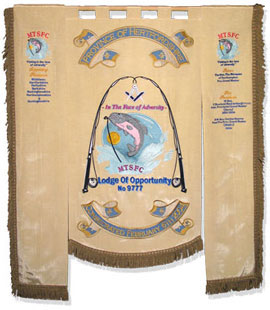 The Lodge Badge has been incorporated into the Lodge Banner in full and has been further embellished with two side panels.
The one on the left shows a record of all the Provinces that have actively taken part in running Charity events. The right hand panel bears the names of the Patron and the Past and current Presidents of the Charity. Thus the banner further establishes the link between the Charity and the Lodge of Opportunity and as it is updated will mark the progress of the Lodge and the Charity